FAQ: Phone to TV: Camera Output from Telephones in PowerPoint

In this FAQ we will  show you how to stream your camera video from your phone to tv by capturing a live IP camera output from a telephone and showing it on your PowerPoint slideshow.
Hi, using VideoPoint on PowerPoint 2016.
I tried to connect the iPhone camera via IP to the VideoPoint in my slide. I get sound but no picture. Any Idea, what is missing or how I can bring a live stream from my iPhone cam into the presentation with VideoPoint?
BS
Interesting question here, and probably not that frequently asked, I must admit. VideoPoint is our PowerPoint add-on to display webcam or camera output on your slides. We initially never thought about phone to tv using direct camera output from a telephone, but let’s give it a try.

You can capture the audience in your meeting room or exhibition and zoom in on people while they ask a question to you as a speaker. Or maybe just some general filming by camera, walking around with your phone, that is then shown via a projector on the wall or on a television circuit.

Let’s describe how to set this up.

First of all, you start with a phone to tv app on your telephone or iPhone in our case. Go to the App Store and find an app that supports IP cameras. For our testing we stumbled on this ipCam app. This app from the Apple App store allows us to capture live video and broadcast this via an IP address. That is exactly what we need. The normal camera of your telephone is not able to broadcast live. 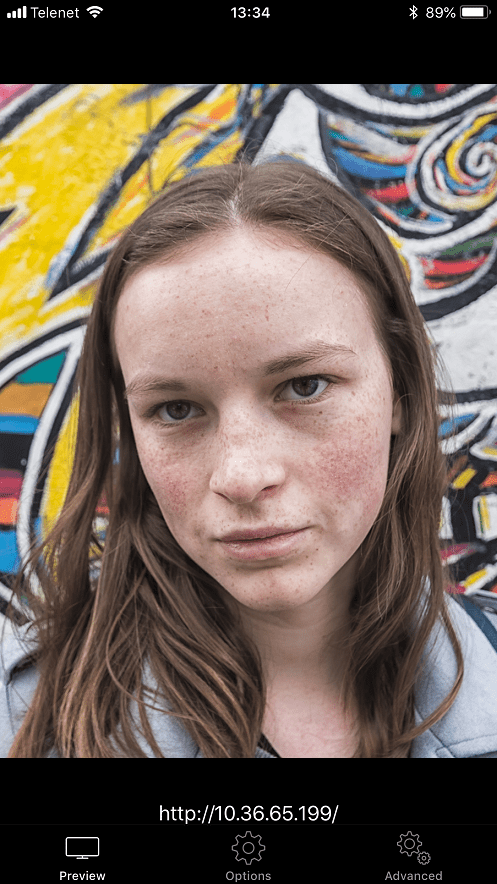 Here on this image, you see the output of what your camera is currently capturing. We are just looking at the camera output without physically recording this on the telephone. So, in other words, we are broadcasting the video via an URL or IP camera.
That is our video source. Now we switch over to PowerPoint and our VideoPoint add-on. We use PowerPoint because this is the best and complete presentation design tool on the market. With the VideoPoint add-on, we can display live video streams from webcams and IP cameras.

Create a PowerPoint presentation and add one or more slides. On the slide that you want to show your camera output, click the VideoPoint menu to open its options.

From the VideoPoint menu, click the Insert button which will insert an empty shape or placeholder for our camera output. Select that shape and set the Source to IP Camera.

At the IP Camera group, set the URL to the IP address listed on your telephone. For the streaming video format that we need here, append ‘/video.mjpg’ to this IP address. For us, we use the URL: http://10.36.65.199/video.mjpg. 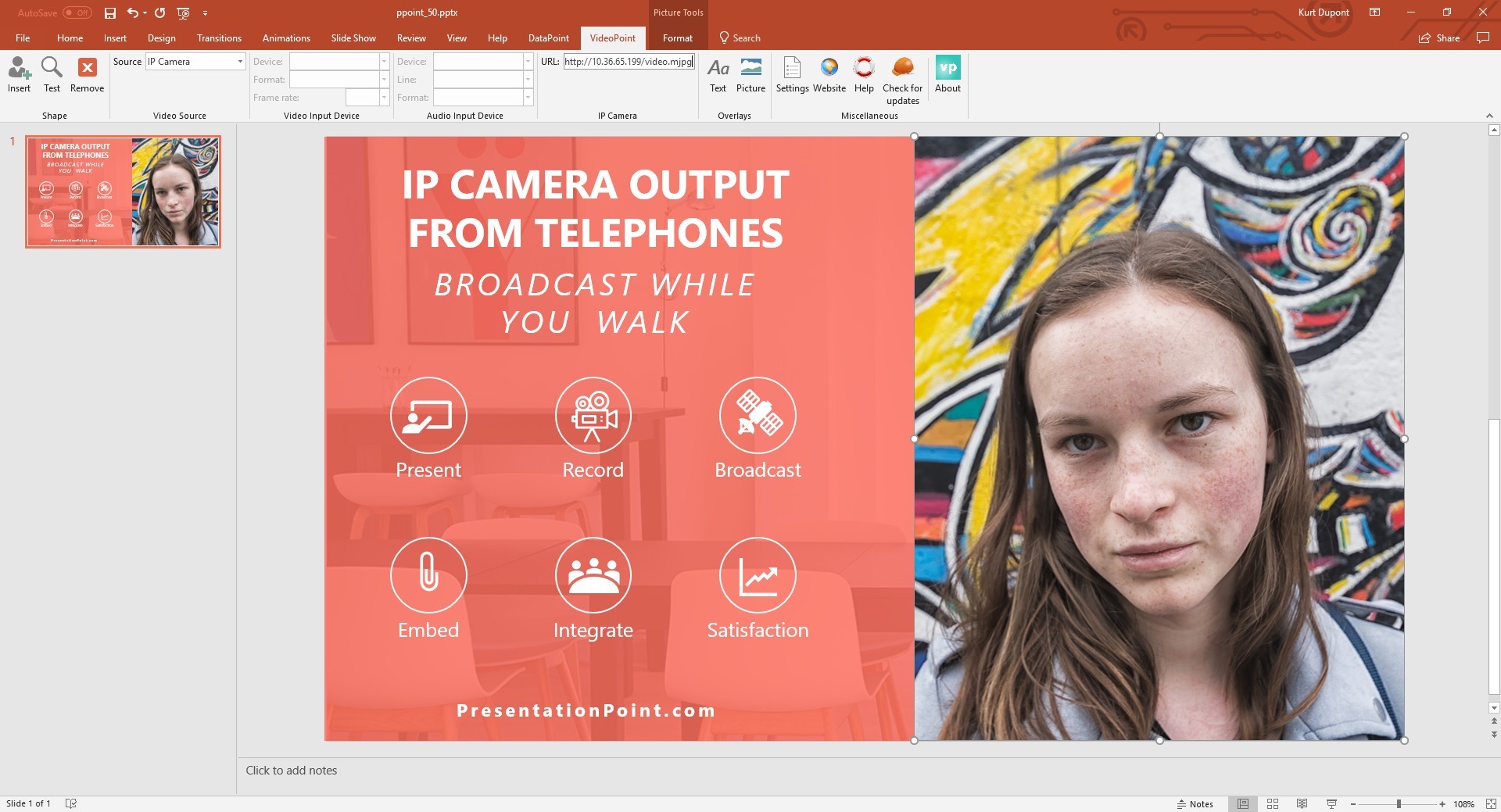 That is it. Set the slideshow type to Kiosk mode to let it run forever. Run the slideshow and walk around with your telephone to capture whatever you want on your video wall, embedded in your normal PowerPoint slideshow. 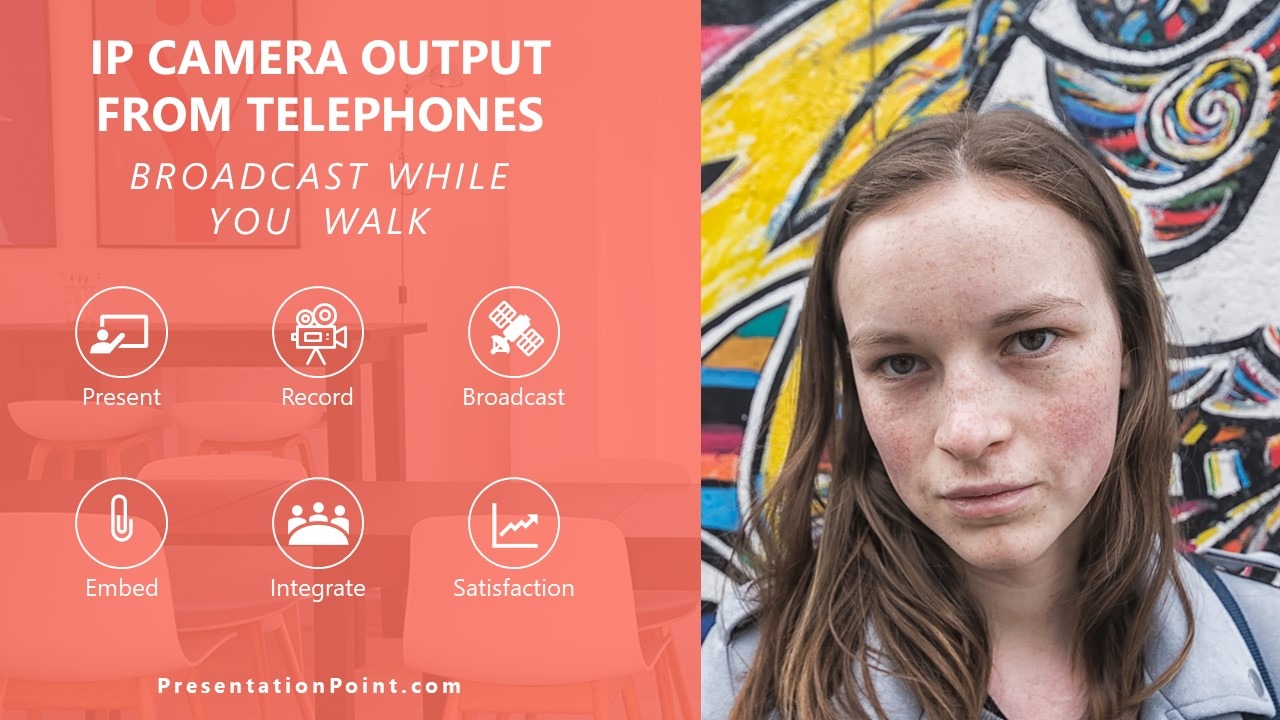 This feature is a great fun factor for your audience and event. Nobody will forget about your happening. And everything is completely done without using complex tools. Just PowerPoint and a little more.